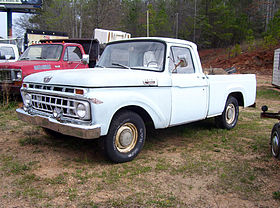 The truck was completely redesigned for 1961 with a wider look; Ford also introduced a new style of truck. Unibody trucks, integrating the cab and the box, were produced from 1961 to 1963. From 1964 on, only the traditional separate cab and bed arrangement were available. Power was over 200 hp (150 kW) with the 1965 update of the powertrain. In 1965, the Twin I-Beam front suspension was introduced with coil springs. 1965 also marked the beginning of a completely different chassis; many parts from 1965-1979 interchange such as brakes and motor mounts. The 1965 and 1966 trucks have a "TWIN I-BEAM" emblem on the front fender. A 4-door crew cab version was also introduced in 1965, which would become a popular option. The Camper Special was built heavier for the slide in campers that were becoming increasingly popular during this time. Ford still offered a "Low GVWR" version of each model. In 1965, the Ranger name first appeared as a styling package for the F-Series pickup trucks. The interior featured bucket seats (from the Mustang) and a curtain over the gas tank which was behind the seats in the cab.